This is a chart about the evolution of the price of gold in euros around 1970, approximately the period during which Nixon decided to put an end to the fixed convertibility of the USD (United States Dollar) into gold. Just to give you an idea of the global phenomenon of inflation regarding currencies. For instance, with the financial crisis, price of 1kg of gold rose from around 20.000€ to around 40.000€. THIS is a bubble obviously ! A huge decrease in the value of gold started a few months ago when the central bank of Cyprus decided to sell its own gold. Gold Prices decreased a lot, around 5000€ less for 1Kg within only a few hours.

But globally, the most important question is whether or not gold value has been increasing a lot since Nixon decision or not. You should be familiar with the fact that the FED used to create a lot of money during the Viet Nam war. This is the major reason why foreign countries decided not to trust the USD anymore. So, is it gold value which is has been increasing of currencies value which is decreasing ? This is the key question. 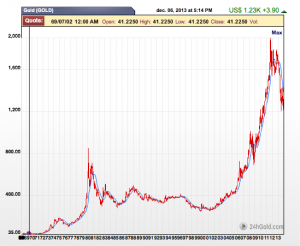